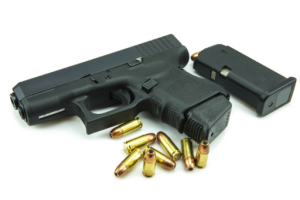 What Must the Government Prove?

According to CALCRIM 2530, in order for you to be found guilty of carrying a loaded firearm under PC 25850(a), the government holds the burden of proving each of the following elements beyond a reasonable doubt:

1. You carried a loaded firearm on your person or in your vehicle;

2. You knew you were carrying a firearm

3. You were in a public place or street in an incorporated city or unincorporated area where it is unlawful to discharge a firearm.

What Does the Law consider a “Firearm”?

According to CALCRIM 2530, you can be charged with this offense if you were carrying “any device designed to be used as a weapon, from which a projectile is expelled or discharged through a barrel by the force of any explosion or other form of combustion.” Additionally, a firearm includes “any rocket, rocket-propelled projectile launcher, or similar device containing any explosive or incendiary material, whether or not the device is designed for emergency or distress signaling purposes.”

What does “Loaded” Mean?

What are the Legal Defenses to Carrying a Loaded Firearm?

Lack of Knowledge: If you did not know that you were carrying a loaded firearm, then you are not guilty of this offense. For example, you could have been carrying a bag containing a firearm momentarily that belonged to a colleague of yours. Or perhaps a friend left a firearm in your car without informing you.

You were Not “Carrying” a Firearm: This charge requires that you were carrying a loaded firearm on your person or in your vehicle. Thus, if police discover a firearm not on your person, or in your vehicle, you cannot be convicted of this offense unless the government can prove circumstantially that you at some point carried the firearm. This could be proven by your own incriminating statements made to police officers.

Illegal Search & Seizure: A common defense to any firearm charge is that police violated your search & seizure rights under the Fourth Amendment of the United States Constitution. Unless you give consent, the law requires police officers to be armed with reasonable suspicion or probable cause to search your person, home, or containers. If the police do not have sufficient cause, or a warrant, then the judge will order the firearm suppressed and the government will be unable to proceed with their case against you.

Momentary or Justifiable Possession: The defense of momentary possession occurs when you were carrying a loaded firearm for the purposes of transporting it to a police station.

What is the Punishment for Carrying a Loaded Firearm?

Can I Reduce my Felony to a Misdemeanor?

Since carrying a loaded firearm is a wobbler offense, you may be eligible to reduce your felony to a misdemeanor pursuant to PC 17(b) after successful completion of your probation period. If you petition is granted, the conviction will be reduced to a misdemeanor “for all purposes” thus relieving you from ever having to disclose that you’ve previously been convicted of a felony. Prior to the court’s decision, the judge will consider the following:

• Whether you pose a threat to public safety

PC 1203.4 governs California’s so called “Expungement” statute which permits someone to withdraw the courts finding of guilt, and dismiss the case, after you successfully completed your probation period. You’re eligible to expunge your conviction regardless of whether it was a felony or misdemeanor. However, certain limitations apply when obtaining this remedy – for example, your sentence cannot have resulted in a state prison term. For more information about expunging your record, contact the Law Offices of John D. Rogers.

If you’ve been arrested or charged with carrying a loaded firearm under PC 25850(a), contact an experienced Newport Beach criminal defense lawyer at the Law Offices of John D. Rogers to schedule a free confidential consultation concerning your rights and defenses.