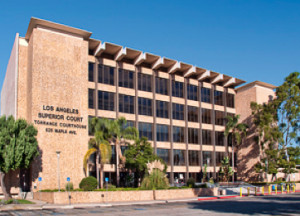 Each of these cities contains their own police departments but the Los Angeles County Sheriff’s Department is also assigned to certain regions. If you’ve been arrested for a felony offense then the Los Angeles County District Attorney’s Office will be the assigned prosecuting agency to your case. If you’ve been arrested for a misdemeanor, the city in which you were arrested will likely prosecute your case with their own criminal division.

John Rogers is a criminal defense lawyer in Newport Beach who frequently handles cases at the Torrance Courthouse. Cases ranging from DUI, theft, weapon offenses, violent crimes, and homicide. Mr. Rogers began his legal experience working at the Los Angeles County District Attorney’s Office located inside the Torrance Courthouse. Mr. Rogers has experienced all the judges and is familiar with all courtroom procedures. When retaining an attorney to handle your case, it’s important to hire an attorney who is familiar with the Torrance Courthouse since all courthouse and even judges are different. Familiarity plays an important role in all respects including negotiations with the prosecutor or requesting a sentence from the judge to jury selection at trial.

If you’ve been arrested and your court appearance is at the Torrance Courthouse, contact an experienced Newport Beach Criminal Defense Attorney at the Law Offices of John D. Rogers. Call (949) 625-4487 for a free confidential consultation concerning your rights and defenses.