In California, arson is charged under penal code 451 pc[1] making it unlawful to maliciously burn a structure, respectively, of another. The statute also imposes liability for someone who did not actually commit the offense, but rather aided, counseled, or helped procure the burning.

Structures can be homes, commercial buildings, vehicles, and even people. It is an inherently dangerous felony that applies to California’s Three Strike laws. Because of the severe nature of the charge, arson is a straight felony that cannot be reduced to a misdemeanor.

A common misconception is that arson requires a large fire to occur. Rather, the crime is complete once a slight charring occurs. In other words, there is no requirement that anything actually set fire. 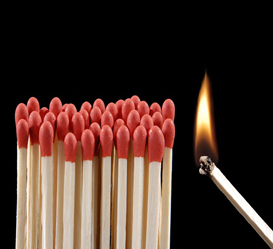 What Must the Government Prove?

In order for you to be found guilty of arson under PC 451, the prosecution has the burden of proving the following elements beyond a reasonable doubt:

Arson is punishable in several ways which depends largely on what/where the burning took place.

Under Penal Code 451.1(a)[7], if any of the following circumstances apply to your case, then you must be sentenced to a consecutive prison sentence, to your underlying sentence, in state prison for 3, 4, or 5 years.

What is Unlawfully Causing a Fire under PC 452?

Unlawfully causing a firearm is known as “reckless burning” which is charged under penal code 452 pc. It does not require malicious conduct like arson, but requires the lesser conduct standard of recklessness. Virtually the same rules and concepts apply to reckless burning versus arson. Reckless burning is not a strike offense and can be reduced to a misdemeanor. Often times, prosecutors may negotiate for you to accept a lesser culpable crimes, like reckless burning, which carries less consequences than arson.

If you have been arrested, charged, or are under investigation for PC 451 or PC 452, then contact the Law Offices of John D. Rogers to schedule a free confidential consultation with an experienced Newport Beach criminal defense attorney.

[1] Penal Code 451: “A person is guilty of arson when he or she willfully and maliciously sets fire to or burns or causes to be burned or who aids, counsels, or procures the burning of, any structure, forest land, or property.”

[3] See Penal Code 451(a) “Arson that causes great bodily injury is a felony punishable by imprisonment in the state prison for five, seven, or nine years.”

[4] See Penal Code 451(b) “Arson that causes an inhabited structure or inhabited property to burn is a felony punishable by imprisonment in the state prison for three, five, or eight years.”

[5] See Penal Code 451(c) “Arson of a structure or forest land is a felony punishable by imprisonment in the state prison for two, four, or six years.”

[6] See Penal Code 451(d) “Arson of property is a felony punishable by imprisonment in the state prison for 16 months, two, or three years. For purposes of this paragraph, arson of property does not include one burning or causing to be burned his or her own personal property unless there is an intent to defraud or there is injury to another person or another person’s structure, forest land, or property.”

[7] Penal Code 451.1: “(a) Notwithstanding any other law, any person who is convicted of a felony violation of Section 451 shall be punished by a three-, four-, or five-year enhancement if one or more of the following circumstances is found to be true:

(1) The defendant has been previously convicted of a felony violation of Section 451 or 452 .

(2) A firefighter, peace officer, or other emergency personnel suffered great bodily injury as a result of the offense.  The additional term provided by this subdivision shall be imposed whenever applicable, including any instance in which there is a violation of subdivision (a) of Section 451 .

(4) The defendant proximately caused multiple structures to burn in any single violation of Section 451 .

(5) The defendant committed arson as described in subdivision (a) , (b) , or (c) of Section 451 and the arson was caused by use of a device designed to accelerate the fire or delay ignition.

(b) The additional term specified in subdivision (a) shall not be imposed unless the existence of any fact required under this section shall be alleged in the accusatory pleading and either admitted by the defendant in open court or found to be true by the trier of fact.”